Tron guy is a PC

Who says Microsoft doesn't have a sense of humor? Not only are they copying the image of John Hodgman's buttoned up "PC" from the Mac ads, a recent marketing email (obviously a long delayed rebuttal to those ads which accompanies the TV ad series) includes a thumbnail of none other than the Tron guy. 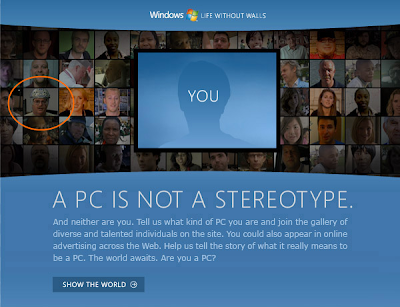 My parents just got a new dog.  They sent me a short note about it when it came home for the first time.  In the email the following words are mentioned that relate to dogs within the context of the message, those that could be understood to have to do with dogs outside the message context are in bold:

My gmail account showed some ads as it always does, they can be seen to the right.  This was one of the rare occasions that I actually looked at them.
Among the ads is one for "Australian Labradoodles".   My parent's new dog just happens to be a lab poodle mix.  However, nowhere in the message is that mentioned apart from the simultaneous occurrence of "lab" with "poodle" in the message.  Obviously though, any astute advertiser would pair those words for their labradoodle business.  Interestingly though, none of the ads seem to directly deal with having animals fixed.
It just amazes me how accurate the google ads can be given so little to go on.  I recently finished reading "The Google Story" which explains a bit about the general ideas behind google's methodologies of search ranking, but doesn't say too much about it's ad matching techniques apart from the word bidding concepts (understandably).  (Very good book, by the way, I highly recommend it.)
I wonder how similar the results would be if I wrote an email saying:

After I brush my teeth I'm going to paw through a catalog then take the poodle to be spayed.